You are here: Home / News

The current Zika virus (ZIKV) outbreak became a global health threat of complex epidemiology and devastating neurological impacts, therefore requiring urgent efforts towards the development of novel efficacious and safe antiviral drugs. Due to its central role in RNA viral replication, the non-structural protein 5 (NS5) RNA-dependent RNA-polymerase (RdRp) is a prime target for drug discovery. Here we describe the crystal structure of the recombinant ZIKV NS5 RdRp domain at 1.9 Å resolution as a platform for structure-based drug design strategy. The overall structure is similar to other flaviviral homologues. However, the priming loop target site, which is suitable for non-nucleoside polymerase inhibitor design, shows significant differences in comparison with the dengue virus structures, including a tighter pocket and a modified local charge distribution.

America is still suffering with the outbreak of Zika virus (ZIKV) infection. Congenital ZIKV syndrome has already caused a public health emergency of international concern. However, there are still no vaccines to prevent or drugs to treat the infection caused by ZIKV. The ZIKV NS3 helicase (NS3h) protein is a promising target for drug discovery due to its essential role in viral genome replication. NS3h unwinds the viral RNA to enable the replication of the viral genome by the NS5 protein. NS3h contains two important binding sites: the NTPase binding site and the RNA binding site. Here, we used molecular dynamics (MD) simulations to study the molecular behavior of ZIKV NS3h in the presence and absence of ssRNA and the potential implications for NS3h activity and inhibition. Although there is conformational variability and poor electron densities of the RNA binding loop in various apo flaviviruses NS3h crystallographic structures, the MD trajectories of NS3h-ssRNA demonstrated that the RNA binding loop becomes more stable when NS3h is occupied by RNA. Our results suggest that the presence of RNA generates important interactions with the RNA binding loop, and these interactions stabilize the loop sufficiently that it remains in a closed conformation. This closed conformation likely keeps the ssRNA bound to the protein for a sufficient duration to enable the unwinding/replication activities of NS3h to occur. In addition, conformational changes of this RNA binding loop can change the nature and location of the optimal ligand binding site, according to AutoLigand calculations. These are important findings to help guide the design and discovery of new inhibitors of NS3h as promising compounds to treat the ZIKV infection. 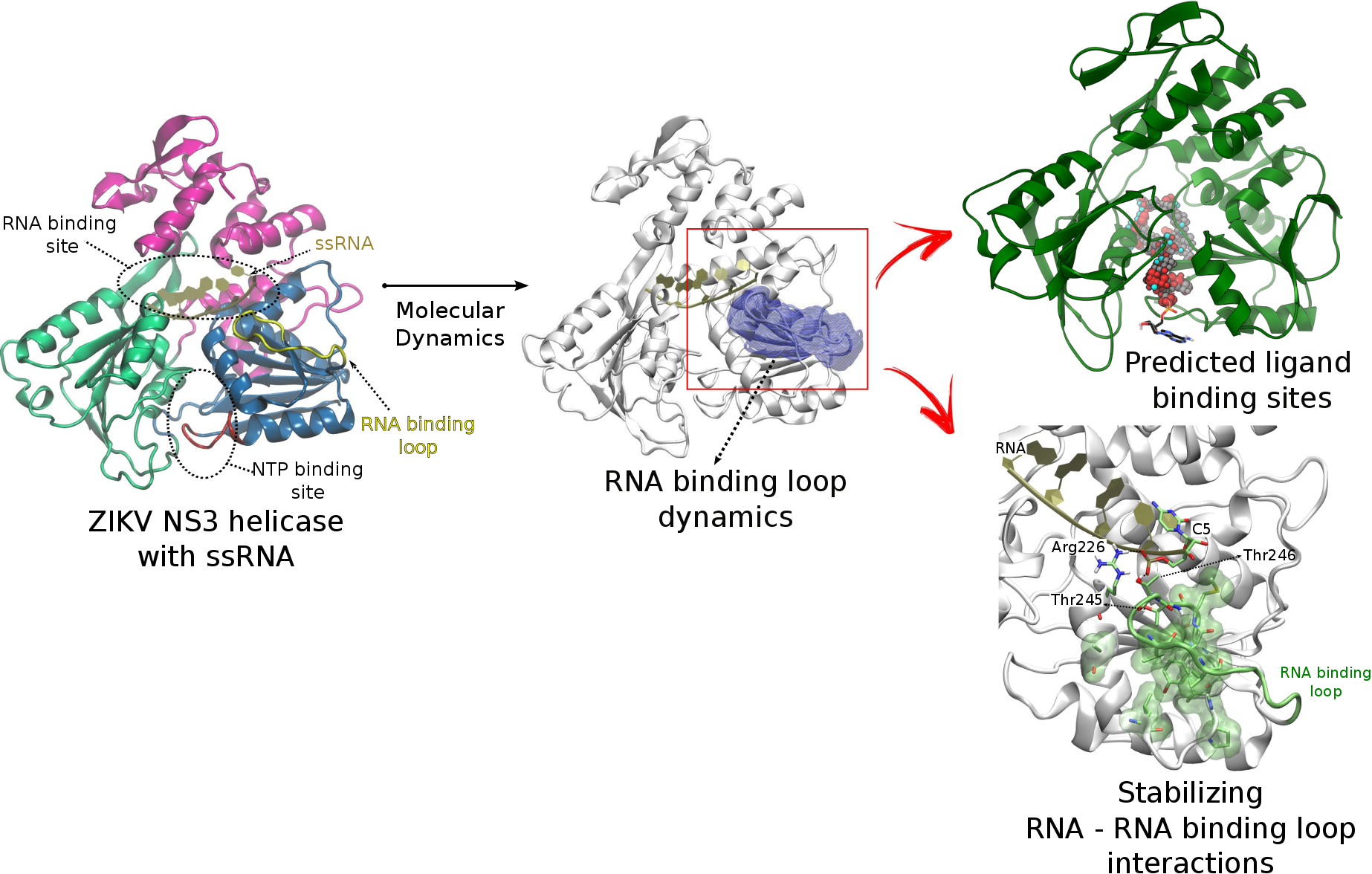 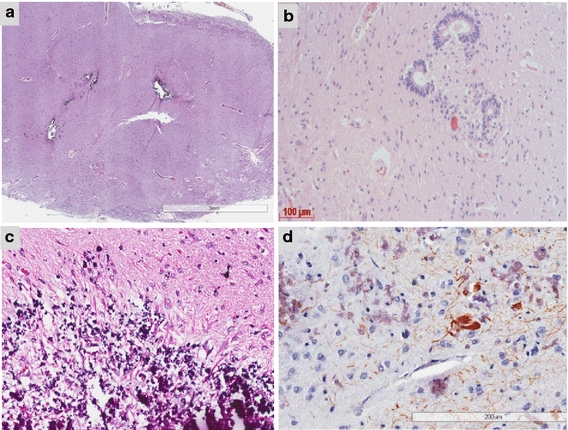 Public health concerns exist surrounding the epidemic of the Zika virus (ZIKV) and the rapid growth of transplantation in developing countries, including endemic zones of active arbovirus transmission, as well as travel to such regions by potential organ donors and recipients. Few data exist regarding the clinical characteristics of ZIKV infection in immunocompromised hosts. Laboratory screening protocols for transplantation to differentiate ZIKV infections from other endemic viral diseases and for the detection of possible donor-derived infection have not been stated. The diagnosis of ZIKV infection remains a challenge, fueled by the lack of standardized commercially available diagnostic tests and validated reference diagnostic laboratories, as well as the limited duration of ZIKV viremia. In this small series, ZIKV infection in renal and liver recipients presented without rash, conjunctivitis, or neurological symptoms, and with abnormal graft function, thrombocytopenia, and bacterial superinfection. We report the first case series of ZIKV infection in solid organ recipients, with a description of clinical and laboratory features and therapeutic management.

Zika virus (ZIKV) is an emerging mosquito-borne flavivirus that has recently been found to cause fetal infection and neonatal abnormalities, including microcephaly and neurological dysfunction. ZIKV persists in the semen months after the acute viremic phase in humans. To further understand the consequences of ZIKV persistence in males, we infected Ifnar1−/− mice via subcutaneous injection of a pathogenic but nonlethal ZIKV strain. ZIKV replication persists within the testes even after clearance from the blood, with interstitial, testosterone-producing Leydig cells supporting virus replication. We found high levels of viral RNA and antigen within the epididymal lumen, where sperm is stored, and within surrounding epithelial cells. Unexpectedly, at 21 days post-infection, the testes of the ZIKV-infected mice were significantly smaller compared to those of mock-infected mice, indicating progressive testicular atrophy. ZIKV infection caused a reduction in serum testosterone, suggesting that male fertility can be affected. Our findings have important implications for nonvector-borne vertical transmission, as well as long-term potential reproductive deficiencies, in ZIKV-infected males.

Despite great attention given to the recent Zika virus (ZIKV) epidemic in the Americas, much remains unknown about its epidemiology and evolution, in part due to a lack of genomic data. We applied multiple sequencing approaches to generate 100 ZIKV genomes from clinical and mosquito samples from 10 countries and territories, greatly expanding the observed viral genetic diversity from this outbreak. We analyzed the timing and patterns of introductions into distinct geographic regions, confirming phylogenetic evidence for the origin and rapid expansion of the outbreak in Brazil, and for multiple introductions from Brazil into Honduras, Colombia, Puerto Rico, other Caribbean islands, and the continental US. We find that ZIKV circulated undetected in many regions of the Americas for up to a year before the first locally transmitted cases were confirmed, highlighting the challenge of effective surveillance for this virus. We further characterize genetic variation across the outbreak to identify mutations with possible functional implications for ZIKV biology and pathogenesis.

Zika virus (ZIKV) is a member of the Flaviviridae family, along with other agents of clinical significance such as dengue (DENV) and hepatitis C (HCV) viruses. Since ZIKV causes neurological disorders during fetal development and in adulthood, antiviral drugs are necessary. Sofosbuvir is clinically approved for use against HCV and targets the protein that is most conserved among the members of the Flaviviridae family, the viral RNA polymerase. Indeed, we found that sofosbuvir inhibits ZIKV RNA polymerase, targeting conserved amino acid residues. Sofosbuvir inhibited ZIKV replication in different cellular systems, such as hepatoma (Huh-7) cells, neuroblastoma (SH-Sy5y) cells, neural stem cells (NSC) and brain organoids. In addition to the direct inhibition of the viral RNA polymerase, we observed that sofosbuvir also induced an increase in A-to-G mutations in the viral genome. Together, our data highlight a potential secondary use of sofosbuvir, an anti-HCV drug, against ZIKV.

Serological diagnosis of ZIKV in countries where dengue virus (DENV) is endemic is challenging, because antibodies elicited by a prior DENV infection may cross-react against ZIKV. Therefore, molecular techniques, such as conventional or real-time reverse transcriptase polymerase chain reaction (RT-PCR/qRT-PCR), remain the reference methods for the diagnosis of ZIKV. However, the sensitivity of ZIKV RT-PCR in serum samples is not optimal due to low and short viremia. Here, we describe findings from a case series of acute febrile illness patient’s whose saliva and blood samples were tested for ZIKV by qRT-PCR.

Zika virus is a flavivirus transmitted to humans primarily through the bite of infected Aedes mosquitoes. In addition to vector-borne spread, however, the virus can also be transmitted through sexual contact. In this paper, we formulate and analyze a new system of ordinary differential equations which incorporates both vector and sexual transmission routes. Theoretical analysis of this model when there is no disease induced mortality shows that the disease-free equilibrium is locally and globally asymptotically stable whenever the associated reproduction number is less than unity and unstable otherwise. However, when we extend this same model to include Zika induced mortality, which have been documented in Latin America, we find that the model exhibits a backward bifurcation. Specifically, a stable disease-free equilibrium co-exists with a stable endemic equilibrium when the associated reproduction number is less than unity. To further explore model predictions, we use numerical simulations to assess the importance of sexual transmission to disease dynamics. This analysis shows that risky behavior involving multiple sexual partners, particularly among male populations, substantially increases the number of infected individuals in the population, contributing significantly to the disease burden in the community.